Ethics: An Essay on the Understanding of Evil (Radical Thinkers) (Paperback) 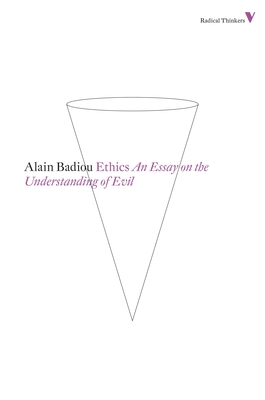 By Alain Badiou, Peter Hallward (Translated by)
$19.95
On Our Shelves Now

This is one of the most original approaches to living and thinking well. Tired of overwrought, inherited theories of duty and rights? Nonplussed by the mothballs of classical liberal and conservative theory? Badiou makes a claim that hinges on imagining ourselves beyond ready-made ideas and seizing the power of our situations. It's an erudite, lucid, and necessary book.

Alain Badiou, one of the most powerful voices in contemporary French philosophy, shows how our prevailing ethical principles serve ultimately to reinforce an ideology of the status quo and fail to provide a framework for an effective understanding of the concept of evil.

Alain Badiou teaches philosophy at the École normale supérieure and the Collège international de philosophie in Paris. In addition to several novels, plays and political essays, he has published a number of major philosophical works, including Theory of the Subject, Being and Event, Manifesto for Philosophy, and Gilles Deleuze. His recent books include The Meaning of Sarkozy, Ethics, Metapolitics, Polemics, The Communist Hypothesis, Five Lessons on Wagner, and Wittgenstein’s Anti-Philosophy.

Peter Hallward teaches at the Centre for Research in Modern European Philosophy at Kingston University, London. He is the author of several books including Absolutely Postcolonial, Badiou: A Subject to Truth, Out of This World: Deleuze and the Philosophy of Creation, and Damming the Flood.

“This is a fiery little book.”—Choice

“His reasoning is powerful and surprising, making some of the best writing in current European philosophy, and his credentials are impeccable.”—Amazon.com

“Badiou is at his strongest in pointing to the inconsistencies of a facile multiculturalism, the pluralism of the food court and the shopping mall, which wilts in the face of any genuine expression of cultural hostility to liberal values.”—Radical Philosophy

“His lively, stimulating and sometimes completely batty book is an attempt to make us think differently about what matters to us ... it is hard not to feel some sympathy for Badiou’s intuition that ‘morality’, ‘evil’ and indeed much of our standard moral vocabulary often serve as almost deliberate disguises for mediocre policy-making, social complacency and a general lack of adventurousness about life”—Times Literary Supplement