American Eclipse: A Nation's Epic Race to Catch the Shadow of the Moon and Win the Glory of the World (Paperback) 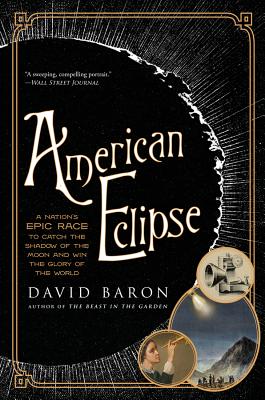 By David Baron
Email or call for price.
Special Order - Subject to Availability

On a hot day in July 1878, the Moon's shadow passed over the desolate Montana landscape. It had done so in the past, but this time there was a strange gathering of three scientists: American Astronomers who braved the wild frontier in search of fame. One of them was Thomas Edison, the young inventor of the phonograph, followed by the press. Another was James Craig Watson, trying to prove the existence of a planet between the Sun and Mercury. And the third one was Maria Mitchell, leading a group of women pushed aside by the mainly male dominated new field of science. They were among the wild characters that had made the West their home.

David Baron weaves a suspenseful and entertaining tale, that is based on science but is more of a historical take on the emerging, still wide, West. The Gilded Age was just beginning and Astronomy in the States was still young.

Edison sought the eclipse to test out his newly invented Tasimeter, which could detect minute variables of heat. He would go on to create the first commercial light bulb. Watson caught a glance of the mysterious Vulcan. And Vassar astronomer Mitchell did much to promote women's work in science. And all of this happened in a West that still had Indian wars and train robberies The myth of the last days of the Wild West come alive in this story.

American Eclipse is timely, for once again the Moon's shadow will darken the earth of the West. This August, the total Solar eclipse will be near our area. This would make a great book to read while traveling to see our era's eclipse or for a History buff who also reads science. And who knows, but you might run into the author.

Longlisted for the PEN/E.O. Wilson Prize for Literary Science Writing

An Amazon Best Book of the Year (Science)

A St. Louis Post-Dispatch Best Book of the Year

This “suspenseful narrative history” (Maureen Corrigan, NPR) brings to life the momentous eclipse that enthralled a nation and thrust American science onto the world stage.

On a scorching July afternoon in 1878, at the dawn of the Gilded Age, the moon’s shadow descended on the American West, darkening skies from Montana Territory to Texas. This rare celestial event—a total solar eclipse—offered a priceless opportunity to solve some of the solar system’s most enduring riddles, and it prompted a clutch of enterprising scientists to brave the wild frontier in a grueling race to the Rocky Mountains. Acclaimed science journalist David Baron, long fascinated by eclipses, re-creates this epic tale of ambition, failure, and glory in a narrative that reveals as much about the historical trajectory of a striving young nation as it does about those scant three minutes when the blue sky blackened and stars appeared in mid-afternoon.

Lauded as a “sweeping, compelling” (Wall Street Journal) work of science history, American Eclipse tells the story of the three tenacious and brilliant scientists who raced to Wyoming and Colorado to observe the rare event. Dedicating years of “exhaustive research to reconstruct a remarkable chapter of U.S. history” (Scientific American), award-winning writer David Baron brings to three-dimensional life these competitors—the planet-hunter James Craig Watson, pioneering astronomer Maria Mitchell, and the ambitious young inventor Thomas Edison—to thrillingly re-create the fierce jockeying of nineteenth-century American astronomy. With spellbinding accounts of train robberies and Indian skirmishes, the mythologized age of the Wild West comes alive as never before. An “enthralling” (Daniel Kevles) and magnificent portrayal of America’s dawn as a scientific superpower, American Eclipse depicts a young nation that looked to the skies to reveal its towering ambition and expose its latent genius.

David Baron, an award-winning journalist and author of The Beast in the Garden, is a former science correspondent for NPR and former science editor for the public radio program The World. An incurable umbraphile whose passion for chasing eclipses began in 1998, he lives in Boulder, Colorado.