Food by Fire: Grilling and BBQ with Derek Wolf of Over the Fire Cooking (Hardcover) 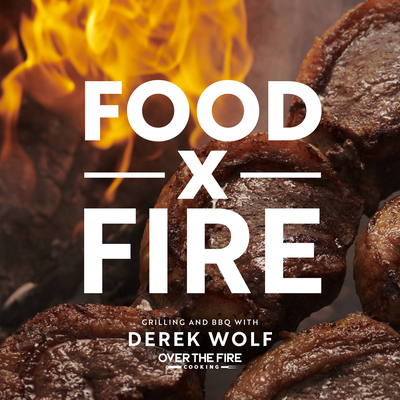 Master the art of starting cooking fires and learn about the best fuel sources. Then tackle a variety of recipes using direct heat and indirect heat, mastering skillets, skewers, and more along the way.

Derek has been researching global fire-cooking techniques for the better part of a decade, traveling around the world to learn about dishes like lamb al asador and brick-pressed chicken. He shares it all in this book. If you’re looking to try cooking on the coals with herb butter oysters or picanha like a Brazilian steakhouse, you’ve come to the right place. Recipes include:  On top of all that, you’ll find recipes for killer sides like Grilled Bacon-Wrapped Asparagus, Cowboy-Broiled Cheesy Broccoli, and Charred Brussel Sprouts, as well as unique sauces like Spicy Cilantro Chimichurri and Maple Bourbon Glaze. It’s everything you need to cook your next meal by fire.

Derek Wolf fell in love with live fire cooking while on his couch, watching TV, and procrastinating school work in college. While scrolling through the endless list of shows, he found a documentary following a South American chef and his adventures cooking with fire. It was love at first sight. He had to try it himself. The first meal Derek and his wife cooked was a Porter Road skirt steak with homemade chimichurri sauce. It must have been beginners’ luck because it was delicious. From that moment on, Derek decided that if he was grilling, then he was grilling over a live fire.

Derek soon started documenting his journey on Instagram, sharing open fire cooking recipes and photos with @overthefirecooking. Soon enough, he had fellow fire enthusiasts submitting photos and videos as well. He started featuring some of these chefs and home cooks on his channels in order to inspire everyone and show that cooking over fire is simple and relatable. Over The Fire Cooking has grown from a couple hundred followers to almost a million in less than 3 years. Derek has been able to travel all over the United States, Europe, and the Americas to learn different styles of cooking. With an average of around 6 million views/impressions and a  dedicated following of close to 1 million, perhaps it’s no surprise that recent side-projects have quickly taken off. His line of spice blends with Spiceology are now their best-selling products. He has paired up with brands like Guinness, Cowboy Charcoal, Weber, and Lodge Cast Iron to help inspire people with simple and approachable recipes and tutorials. He has been featured in Southern Cast Iron Magazine, made TV shorts with Buffalo Trace, and cooked for 1500+ people at multiple festivals. Most weeks, he still writes three new recipes, producing and showcasing them on his socials and blog.