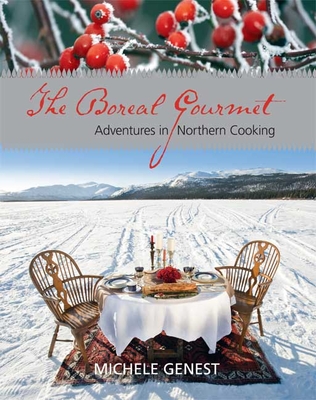 "Bring me moose meat! You will not be sorry!" So says Whitehorse author and cook Michele Genest to the hunters in her circle. Wild is wonderful when it comes to Genest's creative treatments for northern viands, with exciting ideas such as moose cooked in Yukon-brewed espresso stout and finished with chocolate, lime and cilantro, Arctic char marinated in grappa and then hot-smoked, or roasted spruce grouse draped in a sour cream and Madeira sauce. As much culinary adventure story as cookbook, The Boreal Gourmet combines a portrait of northern life with an exploration of wild or "country" foods in gourmet recipes for the home cook. These recipes are inspired by a diversity of countries, traditions and kitchens, and spring from a love affair with the indigenous foods that flourish in the boreal forests and river valleys of the Yukon.

Whitehorse author and chef Michele Genest has recipes for every season supported with information on such northern plants as Artemisia frigida, or pasture sage, and its effect on the flavour of the wild Dall sheep that graze on it, the mysteries of morel mushrooms and tips on where to find them, and advice from Dawson City's Uncle Berwyn on the proper use of birch syrup.

Taking us from salmon, spruce tips and gourmet greens to recipes for artisanal sourdoughs and festive solstice menus, The Boreal Gourmet is an unprecedented collection to inspire both the serious gourmand (who will want to search out wild ingredients in his or her own backyard) and anyone with an appreciation for the culinary delights available north of sixty.

Yukon author and cook Michele Genest has lived in Whitehorse since 1994, where she moved from her hometown of Toronto in search of winter. She has written about food and culture for the past 25 years, and cooked ever since she can remember. Her past experience includes a four-year stint as dining editor of enRoute Magazine, and another as chief dishwasher and fish-cleaner in a waterfront restaurant on a small Greek island. She was co-editor of two anthologies of Yukon writing, Urban Coyote and Urban Coyote, New Territory, and has written several plays, including Fasting Girl, Gulf and Magic Box, all produced by Nakai Theatre. She writes a regular cooking column for Yukon, North of Ordinary Magazine, and her print credits include the Globe and Mail, the Toronto Star, the Montreal Gazette, enRoute, Flare and Geist. Her first cookbook, The Boreal Gourmet, is a national bestseller and won a Canadian Culinary Books award in 2011. She is releasing her second book on northern cuisine, The Boreal Feast, in June 2014.