Joe Beef: Surviving the Apocalypse: Another Cookbook of Sorts (Hardcover) 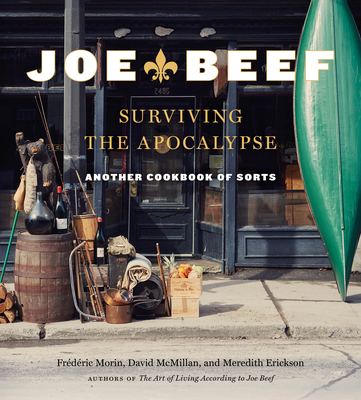 A new cookbook/survival guide/love letter to Montreal for these apocalyptic times, from the James Beard Award–nominated culinary adventurists and proprietors of the beloved restaurant, Joe Beef.

“The first Joe Beef cookbook changed forever what a cookbook could be. Anything that came after had to take it into account. Now, with this latest and even more magnificent beast, the rogue princes of Canadian cuisine and hospitality show us the way out of the numbing, post-apocalyptic restaurant Hell of pretentiousness and mediocrity that threatens to engulf us all. It makes us believe that the future is shiny, bright, beautiful, delicious—and probably Québécois. This book will change your life.” —Anthony Bourdain

It’s the end of the world as we know it. Or not. Either way, you want Joe Beef: Surviving the Apocalypse in your bunker and/or kitchen.

In their much-loved first cookbook, Frédéric Morin, David McMillan, and Meredith Erickson introduced readers to the art of living the Joe Beef way. Now, they’re back with another deeply personal, refreshingly unpretentious collection of more than 150 new recipes, some taken directly from the menus of Fred and Dave’s acclaimed Montreal restaurants, others from summers spent on Laurentian lakes and Sunday dinners at home. Think Watercress Soup with Trout Quenelles, Artichokes Bravas, and seasonal variations on Pot-au-Feu—alongside Smoked Meat Croquettes, a Tater Tot Galette, and Squash Sticky Buns.

Also included are instructions for making your own soap and cough drops, not to mention an epic 16-page fold-out gatefold with recipes and guidance for stocking a cellar with apocalyptic essentials (Canned Bread, Pickled Pork Butt, and Smoked Apple Cider Vinegar) for throwing the most sought-after in-bunker dinner party

Filled with recipes, reflections, and ramblings, in this book you’ll find chapters devoted to the Québécois tradition of celebrating Christmas in July, the magic of public television, and Fred and Dave’s unique take on barbecue (Burnt-End Bourguignon, Cassoulet Rapide), as well as ruminations on natural wine and gluten-free cooking, and advice on how children should behave at dinner.

Whether you’re holing up for a zombie holocaust or just cooking at home, Joe Beef is a book about doing it yourself, about making it on your own, and about living—or at least surviving—in style.

A graduate from no prestigious cooking school, Fred Morin has long forgotten all about the art of plating good-looking food. From the daily task of heading the tiny kitchen at Joe Beef ten years ago he now mostly cooks ingredients that don’t touch one another for three adorable yet very talkative offspring, Henry, Ivan, and Eleanor. He does sometimes cook overly complex and poorly budgeted, ambitious, classic French meals at home for his wife, Allison.
His life is still ruled by brief but intense bouts of diverse endeavors that somehow all come back to restaurants and cooking, be they gardening, trying to fly-fish in Alaska, preparing very large first-aid kits, or building bread ovens. In recent years, he casually alternated between yoga and drinking with an elegance rivaled only by the likes of Beau Brummell and Little Lord Fauntleroy.

David McMillan is the co-owner/chef of Joe Beef, Liverpool House, Vin Papillon, Mon Lapin and McKiernan as well as partner in Les Vins Dame-Jeanne wine agency. Born and raised in Quebec City, David has been involved in Montreal’s restaurants since the age of seventeen and continues to explore, teach, and be fascinated by unique traditional French country cooking. David is father to his three daughters, Dylan, Lola, and Cecile, whom he loves, and when not found at any of the three restaurants on the Little Burgundy block, he’s at his Barkmere cottage.

Meredith Erickson has co-authored The Art of Living According to Joe Beef, Le Pigeon, Olympia Provisions, Kristen Kish Cooking, and Claridge’s: The Cookbook. She is currently working on her own book, Alpine Cooking, and on The Frasca Cookbook. She has written for The New York Times, Elle, Saveur, Condé Nast Traveler, and Lucky Peach. When not traveling, she can be found in Montreal, Quebec (with friends and family at Joe Beef).

“There is an exciting, punk-rock aspirational hippie vibe to every page. . . . This sort of cooking is a way of life." —Sam Sifton, The New York Times

“The first ‘Joe Beef’ cookbook, from Montreal chefs Morin and McMillan is, perhaps, my favorite cookbook of all time. . . . Somehow, impossibly, the sequel is almost better. It has more recipes, it’s quirkier while also being a little more even-tempered, and it’s longer, which means you get to live in their world of Québécois mayhem a bit longer.” —Paula Forbes, Houston Chronicle

“Quebecois chefs McMillan and Morin are still at it. . . . The ‘Apocalypse’ of the title is a vague and compelling creative conceit: everything is ending, so why not make a towering savory confection of smoked whitefish salad garlanded with pastry swans?” —The New Yorker

“It may not be the book you’ll cook from the most (or maybe it will), but it might be the one you’ll love the best." —The Boston Globe

“The first Joe Beef cookbook changed forever what a cookbook could be. Anything that came after had to take it into account. Now, with this latest and even more magnificent beast , the rogue princes of Canadian cuisine and hospitality show us the way out of the numbing, post-apocalyptic restaurant Hell of pretentiousness and mediocrity that threatens to engulf us all.  It makes us believe that the future is shiny, bright, beautiful, delicious—and probably Québécois. This book will change your life.” —Anthony Bourdain

“A superb sophomore cookbook [that] explores deeper, darker thoughts about our current moment. . . . [The authors] still share spectacular recipes like lapin a la moutarde, rabbit with mustard seductively smothered with a hemp crust, but how-to make cough drops, soap and bouillon cubes too. Plus you can pin the stunning 16-page fold-out aspirational apocalyptic pantry guide to the wall of your bunker.” —Chicago Tribune

“Were it not for this book, I would have no choice but to pack my belongings and move to Montreal. It is a beacon of light for the Joe Beefless.” —Jimmy Kimmel

“A rambunctious treatise on culinary maximalism in the face of a tempestuous political climate.” —Eater

“A quirky, charming culinary journal of sorts with recipes. . . . A theatrical book that in some ways mimics what it’s like to step into the celebrated restaurant on Rue Notre Dame in Montreal’s Little Burgundy.” —Taste

“A book for every lover of food and life.” —Diana Henry, The Sunday Telegraph

“Lush, sumptuous, and so, so over the top, about everything. I just want to eat and cook and eat everything in this wondrous book, all at once and right now. This book is an emotional experience: laugh, cry, love, hate, you will do it all. Full of wild, mental, beautiful, inspiring dishes. I love it. It’s a stunner like no other!!!” —Margot Henderson, chef/co-owner, Rochelle Canteen

“Joe Beef: Surviving the Apocalypse claims to be a book ‘about how to build things for yourself,’ a claim it easily surpasses with its eclectic and easy prose. Frédéric, David, and Meredith show that any craft—cooking, carpentry, or creating a great conversation—can be a high art if it’s approached with passion and resolve. This isn’t a book about cooking, it’s a book about living a full, rich life. And we think it’s built well.” —Kevin, Norm, Richard, Tom, and Roger, the gang from This Old House

“Like their first cookbook did seven years [ago], this one upends the genre. More than a series of recipes and anecdotes, it’s a biography of obsessions, a history lesson, a manifesto, and an entertainment that swerves into mixed martial arts and PBS television." —Bloomberg

“This is the book you need to survive, and with a huge grin on your face. . . . It seems that this is the book I have always wanted. Oeufs mayonnaise clinches it.” —Jeremiah Tower