Extreme Brownies: 50 Recipes for the Most Over-the-Top Treats Ever (Hardcover) 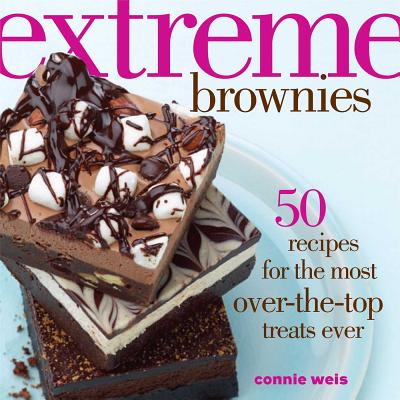 These are the last brownie recipes you will EVER need in your life. Once you take a bite of Connie's brownies, you will never be able to eat any other brownie again without feeling sad or disappointed. This cookbook provides detailed instructions for the 50 BEST brownies and blondies on earth, like none you have ever experienced before!

Extreme Brownies is a collection of 50 wildly creative, extensively tested recipes from pastry chef and restaurant consultant Connie Weis, owner of brownie business Brownies & S'more in Virginia Beach, VA. Connie believes that brownies can't just look great, they have to taste great and have the right texture, making them above all, calorie-worthy.

These are the most extreme brownies you've ever seen and like none you've ever tasted before!

Connie's passion for food landed her a job in the specialty food business as the merchandise manager/buyer for the Taste Unlimited stores in southern Virginia. She has been an executive pastry chef, director of food development, restaurant consultant, food editor, and has appeared on the TODAY show with Kathie Lee and Hoda to do a cooking segment with her brownies.

Besides cooking and baking, Connie's interests include organic gardening, with the plants started in her greenhouse fed by eggshell (from brownies) enriched compost. She currently participates as a part-time vendor at the Old Beach Farmers Market with her business, Brownies & S'more in Virginia Beach, Virginia, where she resides with her husband Don.

"My family descended on Connie’s brownies like crazed people coming off a juice cleanse. They are unlike any confection I’ve ever had. Hanging out in that space between a rich pudding and fudge, her brownies are really something I’d like to eat alone, in small bites, possibly in bed." (Vivian Howard, chef/co-owner of Chef & the Farmer)

"If you've ever tasted one of Connie Weis' brownies, grab a napkin. Her new cookbook, "Extreme Brownies," is certain to elicit a mighty Pavlovian response." (Lorraine Eaton, Virginia Pilot)