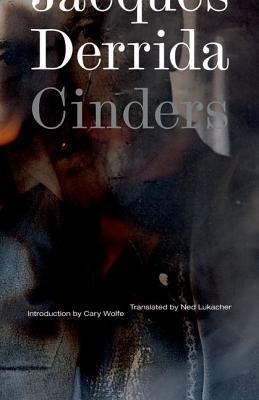 By Jacques Derrida, Ned Lukacher (Translated by)
Email or call for price.
Out of Print - Not Available New

“More than fifteen years ago,” Jacques Derrida writes in the prologue to this remarkable and uniquely revealing book, “a phrase came to me, as though in spite of me. . . . It imposed itself upon me with the authority, so discreet and simple it was, of a judgment: ‘cinders there are’ (il y a là cendre). . . . I had to explain myself to it, respond to it—or for it.”

In Cinders Derrida ranges across his work from the previous twenty years and discerns a recurrent cluster of arguments and images, all involving in one way or another ashes and cinders. For Derrida, cinders or ashes—at once fragile and resilient—are “the better paradigm for what I call the trace—something that erases itself totally, radically, while presenting itself.”

In a style that is both highly condensed and elliptical, Cinders offers probing reflections on the relation of language to truth, writing, the voice, and the complex connections between the living and the dead. It also contains some of his most essential elaborations of his thinking on the feminine and on the legacy of the Holocaust (both a word—from the Greek hólos, “whole,” and kaustós, “burnt”—and a historical event that invokes ashes) in contemporary poetry and philosophy. In turning from the texts of other philosophers to his own, Cinders enables readers to follow the trajectory from Derrida’s early work on the trace, the gramma, and the voice to his later writings on life, death, time, and the spectral.

Among the most accessible of this renowned philosopher’s many writings, Cinders is an evocative and haunting work of poetic self-analysis that deepens our understanding of Derrida’s critical and philosophical vision.

Jacques Derrida (1930–2004) was a French philosopher associated with the poststructuralist and postmodernist movements. Called the most famous philosopher of our time, he is most well known for developing the concept of deconstruction. He published more than forty books, including Of Grammatology, Writing and Difference, and Speech and Phenomena.

Cary Wolfe is Bruce and Elizabeth Dunlevie Professor of English at Rice University. His books include Zoontologies and What Is Posthumanism?, both from Minnesota.

Ned Lukacher is professor of English at the University of Illinois at Chicago. He is the author of Primal Scenes: Literature, Philosophy, Psychoanalysis.