The Heart Is a Lonely Hunter (Paperback) 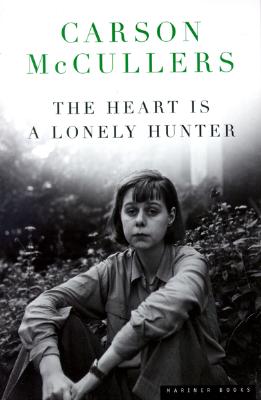 By Carson McCullers
Email or call for price.
Special Order - Subject to Availability

An overlooked classic, The Heart is a Lonely Hunter follows five people living in the American South prior to World War II. Each loves humanity deeply, but for one reason or another, they are severed from those who might understand them.

The first is Mick Kelly, a music lover from a poor family who, given her class and gender, is barred from opportunities to learn an instrument or musical composition. No one in her family understands her, so she is resigned to listening to classical greats on the radio, laboriously plunking them out during the scant minutes she has access to her school’s piano. Gifted but poor, her dream might escape her.

The second, Jake Blount, is a labor agitator, passionately advocating for the rights of workers wherever he drifts, but tragically unable to foment change or even connect with other people. His failure to realize justice and find like-minded workers and thinkers in the South sends him searching for consolation in liquor. His search may be endless.

The third, Biff Brannon, owns a local diner. He silently observes the movements and tussles of this small town from behind his counter. Recently a widower, he’s left to wonder what he’s doing with his life, even though his marriage was unhappy, and if there’s a life worth living anymore.

The fourth is Dr. Benedict Mady Copeland, the only Black physician in town. Apropos to America’s historical and current grapples with race and violence, his tale is punctuated by hostile interactions with white law-keepers. However, what haunts Dr. Copeland most is the inability of his Black neighbors and family to unite with him and stand against bigotry. Well-read, philosophical, and radical, he is singular, and lonely for it.

Our fifth character is the linchpin that might quilt our motley crew of dreamers together. John Singer is a deaf and mute man. Each of the other four thinks of Singer as the only person who understands their hearts, their desires, and their loneliness. They meet him and find that he is the most sympathetic human to live. None realizes that Singer can't sympathize with them as much as they believe; he can't read their lips quickly enough, and besides, he has his own struggles and desires, and is physically unable to communicate these to his frequent callers. The only thing to do, in his mind, is bring these four people together somehow.

One can name the structural forces pushing these people to the margins of society: race, class, ability, age, gender, education, and so on. Yet, these margins are solitary places where they gain a sharper understanding of the world's machinations than most people. So then, is there a deeper relation between them that binds them together but cleaves them from others? Some intellectual and emotional genealogy, invisible to us and them? Are these dreamers punished or rewarded for their courage?

This book has a tragic verisimilitude to our world, afflicted by an illusion of connectivity that only alienates us further. My words do it injustice.

With the publication of her first novel, THE HEART IS A LONELY HUNTER, Carson McCullers, all of twenty-three, became a literary sensation. With its profound sense of moral isolation and its compassionate glimpses into its characters' inner lives, the novel is considered McCullers' finest work, an enduring masterpiece first published by Houghton Mifflin in 1940. At its center is the deaf-mute John Singer, who becomes the confidant for various types of misfits in a Georgia mill town during the 1930s. Each one yearns for escape from small town life. When Singer's mute companion goes insane, Singer moves into the Kelly house, where Mick Kelly, the book's heroine (and loosely based on McCullers), finds solace in her music. Wonderfully attuned to the spiritual isolation that underlies the human condition, and with a deft sense for racial tensions in the South, McCullers spins a haunting, unforgettable story that gives voice to the rejected, the forgotten, and the mistreated -- and, through Mick Kelly, gives voice to the quiet, intensely personal search for beauty.
Richard Wright praised Carson McCullers for her ability "to rise above the pressures of her environment and embrace white and black humanity in one sweep of apprehension and tenderness." She writes "with a sweep and certainty that are overwhelming," said the NEW YORK TIMES. McCullers became an overnight literary sensation, but her novel has endured, just as timely and powerful today as when it was first published. THE HEART IS A LONELY HUNTER is Carson McCullers at her most compassionate, endearing best.

"When one puts [this book] down, it is with . . . a feeling of having been nourished by the truth." --May Sarton

“To me the most impressive aspect of THE HEART IS A LONELY HUNTER is the astonishing humanity that enables a white writer, for the first time in Southern fiction, to handle Negro characters with as much ease and justice of those of her own race. This cannot be accounted for stylistically or politically; it seems to stem from an attitude toward life.” -- Richard Wright