When a traveler in north central Massachusetts takes the wrong fork at the junction of Aylesbury pike just beyond Dean's Corners he comes upon a lonely and curious country.

The ground gets higher, and the brier-bordered stone walls press closer and closer against the ruts of the dusty, curving road. The trees of the frequent forest belts seem too large, and the wild weeds, brambles and grasses attain a luxuriance not often found in settled regions. At the same time the planted fields appear singularly few and barren; while the sparsely scattered houses wear a surprisingly uniform aspect of age, squalor, and dilapidation.

Without knowing why, one hesitates to ask directions from the gnarled solitary figures spied now and then on crumbling doorsteps or on the sloping, rock-strewn meadows.

“Lovecraft country” was a term coined by editor Keith Herber to describe the fictional New England setting of H. P. Lovecraft’s short stories, a quasi-Massachusetts with a bit of Providence thrown in.

The Miskatonic River, an invention of HPL’s which winds through many of his stories, at times flows through quiet countryside, past towns where none but the usual human horrors exist, and people blissfully live their lives. And then there are the other forks and bends which snake toward horrors best left hidden. The mouth of this mighty river is at Innsmouth.

The fictional village of Innsmouth is described by HPL as “the ancient Massachusetts seaport,” a mere spot on the map in “The Shadow Over Innsmouth” for a young man on a “sightseeing, antiquarian, and genealogical” tour of New England. This phrase of HPL’s makes me giggle – the thought of a young Lovecraft-figure on a thoroughly tweedy sightseeing tour while his contemporaries deadened their brains in speakeasies and brothels. That’s one of the curiosities of Lovecraft; he was old before his time. He liked to be called “Grandpa” and sometimes signed his letters so. I have a friend with a similar affliction. Though a pink-haired 20-something, we call them “Casper the Friendly Grandpa” for their predilection for waist-high pants and button-down linen shirts, the kind worn by viejos playing dominos in Havana. Come to think of it, I know another young man with a similar affliction who is in his early 20s and recently off to Warwickshire to study perhaps the most old-manish of academic pursuits, the German and French philosophies of the 20th century known as Continental Philosophy. Holden, you know I’m talking to you.

Gentle ribbing aside, I appreciate those who cultivate an aesthetic rooted in the past. If that weren’t so, I wouldn’t have spent my teens and twenties engrossed by Somerset Maugham and the Brontës. Perhaps because Lovecraft’s tastes aligned with an older generation, particularly of a Victorian scholar/gentleman, we have such delightfully gothic descriptions of settings from him. This is how he described the approach by bus to “the ancient Massachusetts seaport” in his short tale:

The day was warm and sunny, but the landscape of sand and sedge-grass, and stunted shrubbery became more and desolate as we proceeded. Out the window I could see the blue water and the sandy line of Plum Island, and we presently drew very near the beach as our narrow road veered off from the main highway to Rowley and Ipswich. There were no visible houses, and I could tell by the state of the road that traffic was very light hereabouts. The weather-worn telephone poles carried only two wires. Now and then we crossed crude wooden bridges over tidal creeks that wound far inland and promoted the general isolation of the region.

Clearly, Lovecraft was a master of setting and mood. By including details such as weather-worn telephone poles that carry only two wires, we’re given a sense of how out of the way this place is; how uncivilized. The road to Innsmouth is foreboding. A feeling of unease accompanies the reader as she follows the doomed protagonist into a setting that only grows darker. For fans of horror, this kind of scene setting is the master stroke which can divide a chilling tale from the mediocre. Consider the setting of Stephen King’s ‘Salem’s Lot. Like Innsmouth, the town is out of the way. Signs pointing to it are lacking. The town is decrepit; one doesn’t know if anyone is alive there. He has a feeling he shouldn’t be there, and yet, he is. The town itself is the backdrop for terror. 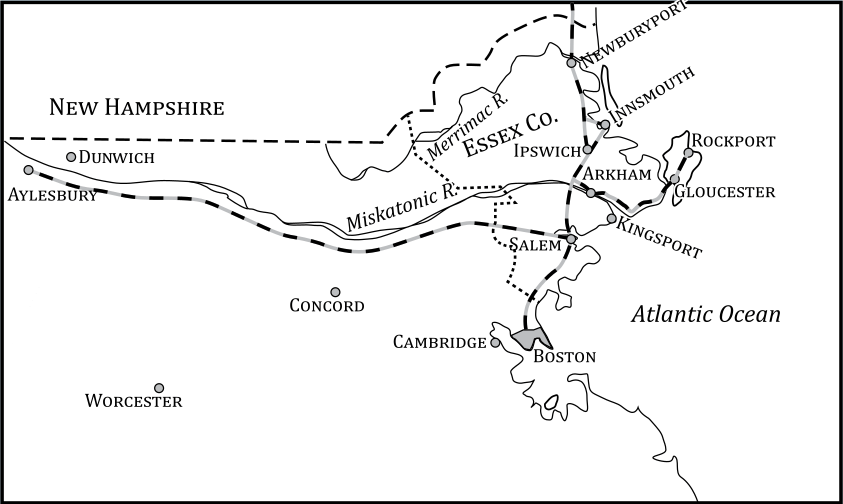 Innsmouth may be one of HPL’s more terrifying place inventions, but the heart of Lovecraft country is Arkham.

Arkham, north of Salem, south of Innsmouth, is the largest city in Lovecraft country. It is where one finds the fictional ivy league institution, Miskatonic University, where the only extant copy of John Dee’s translation of the Necronomicon resides. (Fictional, and fictional.) it is from Arkham that Lovecraft’s doomed scholar-heroes hail, and it is to Arkham seekers of arcane knowledge go in order to gain a glimpse or small foothold for their coming confrontation with horror.

By including Miskatonic University among lists of prestigious institutions across many of his tales, Lovecraft threaded a feeling of credibility to his adventures. In the story I’ve chosen for this week, “The Dunwich Horror,” Lovecraft lists the Library of Miskatonic University along with the Widener Library at Harvard, the Bibliothèque Nationale in Paris, the British Museum, and curiously, the University of Buenos Ayres (Lovecraft’s spelling), which is prestigious, but isn’t usually included in the ethnocentric thinking of Anglophiles like Lovecraft. Curiouser, and curiouser. I can only guess he chose Buenos Aires for setting mood – he wanted a strain of the exotic among the stodgy old places Euro-centric thinkers are used to, something to set the mind on unusual pathways and open the door for more to come.

Arkham has come to occupy a place in our collective culture, most notably as Arkham Asylum just outside Gotham City, where many of Batman’s most insidious foes have been kept or escaped from. Arkham in HPL’s writing was a sinister place where children go missing around certain holidays with pagan origins, and the poorer residents of the city accept the rumors of ritualistic child sacrifice as a miserable fact of life. The city is host not only to the university, but the Arkham Sanitarium, most likely modeled on the grisly real-world Danvers State Insane Asylum in Danvers, Massachusetts. As the child of parents who died in asylums, HPL knew the horrors of these institutions firsthand.

Lovecraft country has verisimilitude; it is and isn’t a place. Many of the descriptions Lovecraft wrote were based on places he visited in New England. “The Dunwich Horror” was inspired by his visit to a contemporary in the amateur journalism movement, Edith Miniter, at whose home in Wilbraham, Massachusetts, Lovecraft learned the folk legend of the whippoorwills that are said to gather near the dying in order to steal their souls.

“The Dunwich Horror” terrified me when I was young, in the Mary Shelley sense: it frightened me, and excited me, much as young Mary Godwin’s tale of reanimation must have terrified her friends on a dark, stormy night. Over the years I have added this tale to my pantheon of stories I describe colloquially as “spooky most,” such as “The Signal-Man” by Charles Dickens, anything by Shirley Jackson, and Hawthorne’s House of the Seven Gables.

The setting is part of the story’s charm, the inclusion of local myth another. HPL wrote:

Other traditions tell of foul odours near the hill-crowning circles of stone pillars, and of rushing airy presences to be heard faintly at certain hours from stated points at the bottom of the great ravines; while still others try to explain the Devil's Hop Yard—a bleak, blasted hillside where no tree, shrub, or grass-blade will grow. Then, too, the natives are mortally afraid of the numerous whippoorwills which grow vocal on warm nights. It is vowed that the birds are psychopomps lying in wait for the souls of the dying, and that they time their eerie cries in unison with the sufferer's struggling breath. If they can catch the fleeing soul when it leaves the body, they instantly flutter away chittering in daemoniac laughter; but if they fail, they subside gradually into a disappointed silence.

Lovecraft scholars have yet to agree unanimously on which real world locations inspired these descriptions, but suggestions have been made. The hills crowned with circles of stone pillars may reference Mystery Hill, also known as “America’s Stonehenge.” Some who have combed through HPL’s letters and effects claim he visited just before the creation of “The Dunwich Horror,” but others argue he couldn’t possibly have been there until the 1930s. Either way, the site known as “America’s Stonehenge” was purchased the year HPL died and developed (and some say embellished) for tourism.

The tale itself is bizarre; there are intimations of paternal-child rape, of matricide, and of ritual animal slaughter. Dark happenings occur in Dunwich. The day is saved, however, by a scholar from Miskatonic University. For this, fans and scholars of Lovecraft often dismiss “The Dunwich Horror” as inferior to HPL’s other works, where man is helpless in the face of cosmic horror and no clear dichotomy between perceived good and evil exists. In “The Dunwich Horror,” there is evil; it is pure, and terrifying, and as ghostly as the song of the whippoorwill. This is the only story of Lovecraft’s I know of in which ‘good’ triumphs. Perhaps that is another reason I like it. I like to think of people winning out, at least sometimes, against the dark cosmos surrounding us. But I also like the story because I sympathize with the devil. I care about what happens to Wilbur Whately and the Horror that follows, and even mourn a little when they are defeated.

You can find “The Dunwich Horror” in many compilations of Lovecraft’s work, because despite its critical reviews, it continues to be one of his best-known stories. For our purposes, the story can be found in The Annotated H.P. Lovecraft and Bloodcurdling Tales of Horror and the Macabre: The Best of H. P. Lovecraft.